Bart Simpson And His BLAD Welcome To Scotland 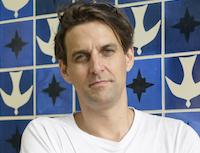 It gives us immense pleasure to soon welcome Canadian filmmaker Bart Simpson to Scotland where he’ll start the editing of his new film, Brasilia: Life After Design (BLAD).

BLAD is a co-production between Lowik Media (Lucie Tremblay) and Aconite Productions (Aimara Reques) and is being co-financed by Creative Scotland amongst other international financiers.

Bart is a multi-award winning filmmaker, best known for his work on films such as ‘The Corporation’ and ‘Big Boys Gone Bananas’. Also, we are proud that Bart is collaborating in Scotland with award winning editor, Colin Monie ( ‘Water’ ‘Hallam Foe’ ‘Magdalene Sisters’ ‘Young Adam’)

Brasilia: Life After Design is the story of a city in conflict between its environment and its people. A true modernist experiment, Brasilia is considered by UNESCO as a World Heritage Site. Despite the population growing every year, the city plan itself cannot change. It was designed for 500 000 people, and now over two and a half million live within its borders. Despite its designers’ best intentions, people were secondary considerations. And in order to live there, people have to break the city’s rules.

As Scotland celebrates next year, the year of Innovation, Architecture and Design, please keep an eye on our site and social media for screenings of this film at local cinemas.

Thanks to our team and Creative Scotland for their continuing support.